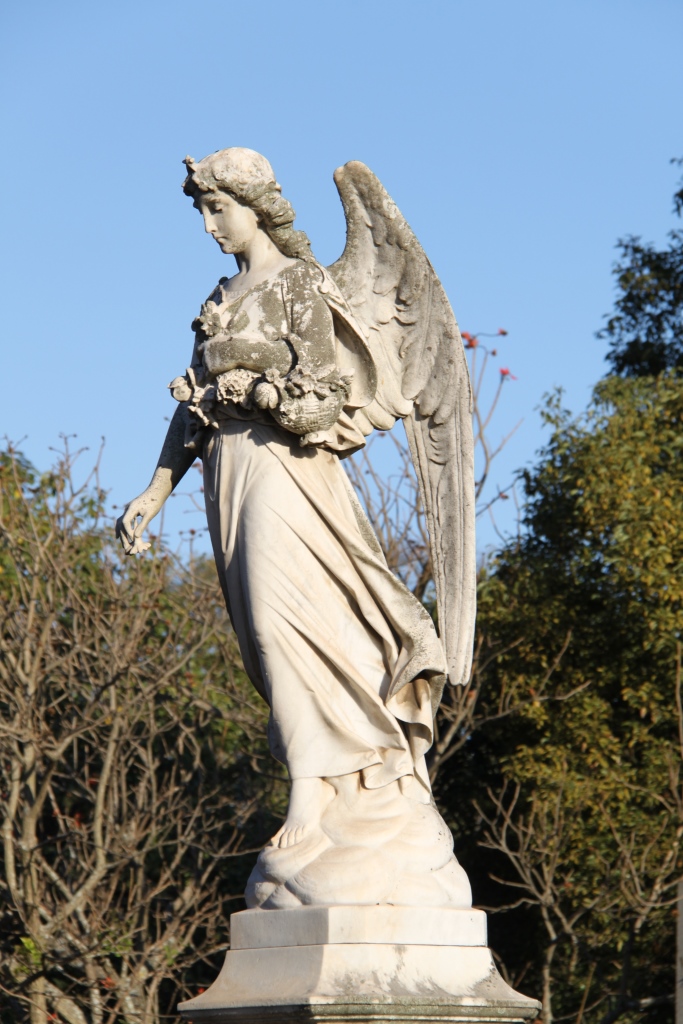 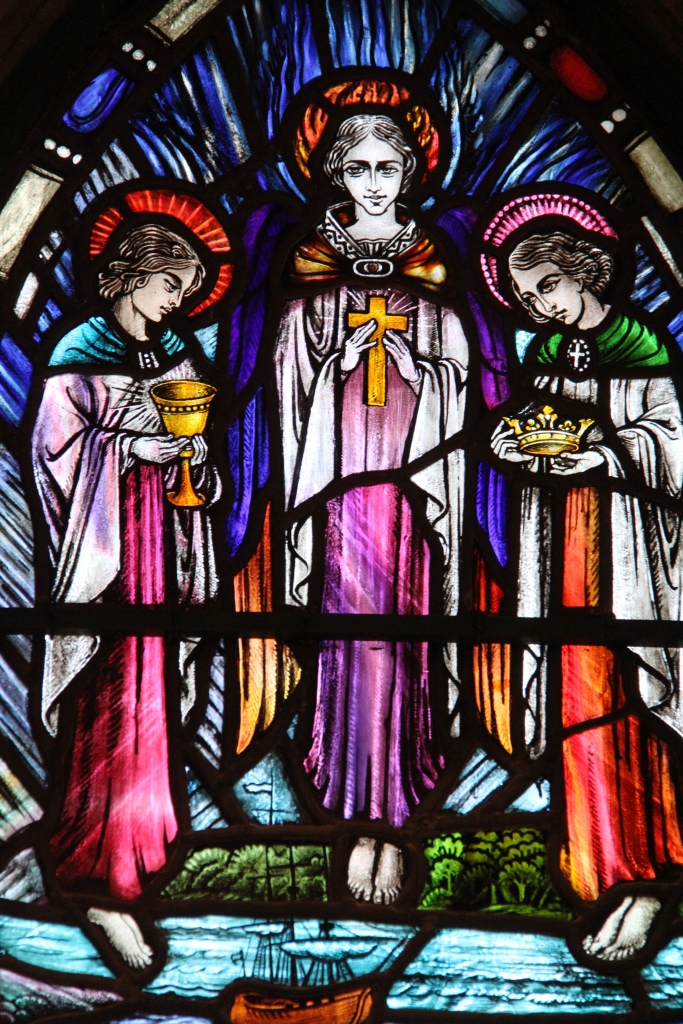 In 1835, Captain Allan Gardiner retired from the navy and went to Natal to begin missionary work amongst the Zulus. Although the Zulus as a whole were singularly disinterested in both his and most other missionary efforts, when he returned to Durban he received a cordial welcome by its White residents, and decided to build a church and a school on the wooded hill west of the bay. He named his mission Berea, in honour of St Paul. The land upon which the mission station stood subsequently became a part of Christopher Cato’s estate. In the 1860s, Cato gave this land to the Anglican Church as his contribution towards the construction of a church on the Berea. As a result the first St Thomas’s Church, a corrugated iron structure, was completed in 1864. The prefabricated building had previously been made in England, and was sent to South Africa by a Mrs Danby Harcourt of Yorkshire as a gift to the parish of Congella. The parish was unable to afford the 200 GBP cost of transporting the church from the harbour and erecting it on its site, but an enterprising missionary, Revd E Rivett, collected the money necessary from local inhabitants and had the church built in Ridge Road on the Berea. It was inaugurated by the Archbishop of Cape Town, the Rev Robert Gray on 28 June 1864. This structure was in use until 1899 when a new church, also called St Thomas, was built on Musgrave Road. By 1928 the old church had become so dilapidated that its steeple collapsed and as a result, the remainder had to be demolished. A new church was built in its place as a memorial to Captain Gardiner. 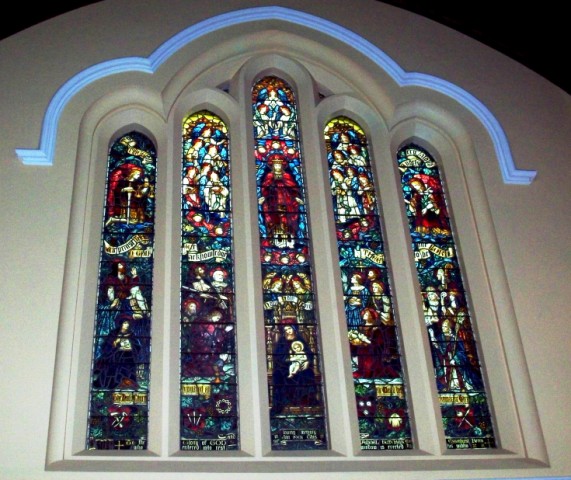 It is difficult to imagine St Thomas without the beautiful Te Deum window above the Altar and yet when the church was built there was no window in the East Gable.  In 1898 it was suggested that a window be placed in the Gable but this idea was shelved as too expensive as the cost exceeded £25!

At the vestry meeting of 1902, it was announced that Mr Samuel Butcher had left a bequest of £2000 to St  Thomas to be used for the completion of the church, and that Mrs Butcher undertook to  donate a stained glass window: “This vestry wishes to express its deep gratitude to Mrs S Butcher for her most kind promise to place a stained glass window, in memory of her late husband, in the east end of the Church when the chancel is completed.”

In 1904 the designs for the window were drawn up by one of the best English firms. The windows were made in England and shipped out to South Africa.  When they were installed, the vicar, Revd F.S.K. Gregson gave thanks to Mrs S Butcher on behalf of the congregation for her beautiful gift.  More than a century later as we sit and appreciate the gorgeous stained glass windows we echo his gratitude and appreciation. 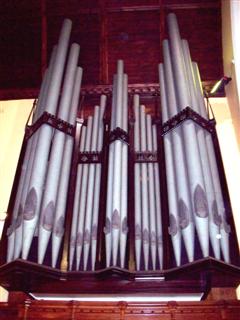 When the church in Musgrave Road was built in 1899 the organ which had been installed in Old St Thomas in 1893, was brought across to the new church.  In 1904  Mr and Mrs Harold Miller donated the money for  the present organ. It was made by  Henry Willis & Sons, a firm of pipe organ builders in the UK. They came out to this country to install it in St Thomas in 1905.  Willis & Sons is regarded as the leading organ builders of the Victorian era, itself a time when both civic and religious commitment led to the erection of a large number of impressive buildings and other public works. The most famous Willis organs are probably those in the Royal Albert Hall, St. Paul’s Cathedral and Salisbury Cathedral.  Although Willis & Sons is mostly remembered for organs on the grand scale they also built smaller instruments such as the organ at St Thomas.

The organ was built in 1905 and was upgraded and modernized in 1957 at a cost of £3000.  New stop added in 1990.   Further repairs were undertaken in 2006-7 when the leaking roof caused damage and the opportunity was used to upgrade the mechanism affected wear and tear.  This was made possible by generous donations by the St Thomas parishioners to the Organ Fund.

The wonderful sound that the organ produces, over 100 years since it was installed, bears testimony to the quality of Willis & Sons skills. It is considered one of the finest church organs in South Africa. 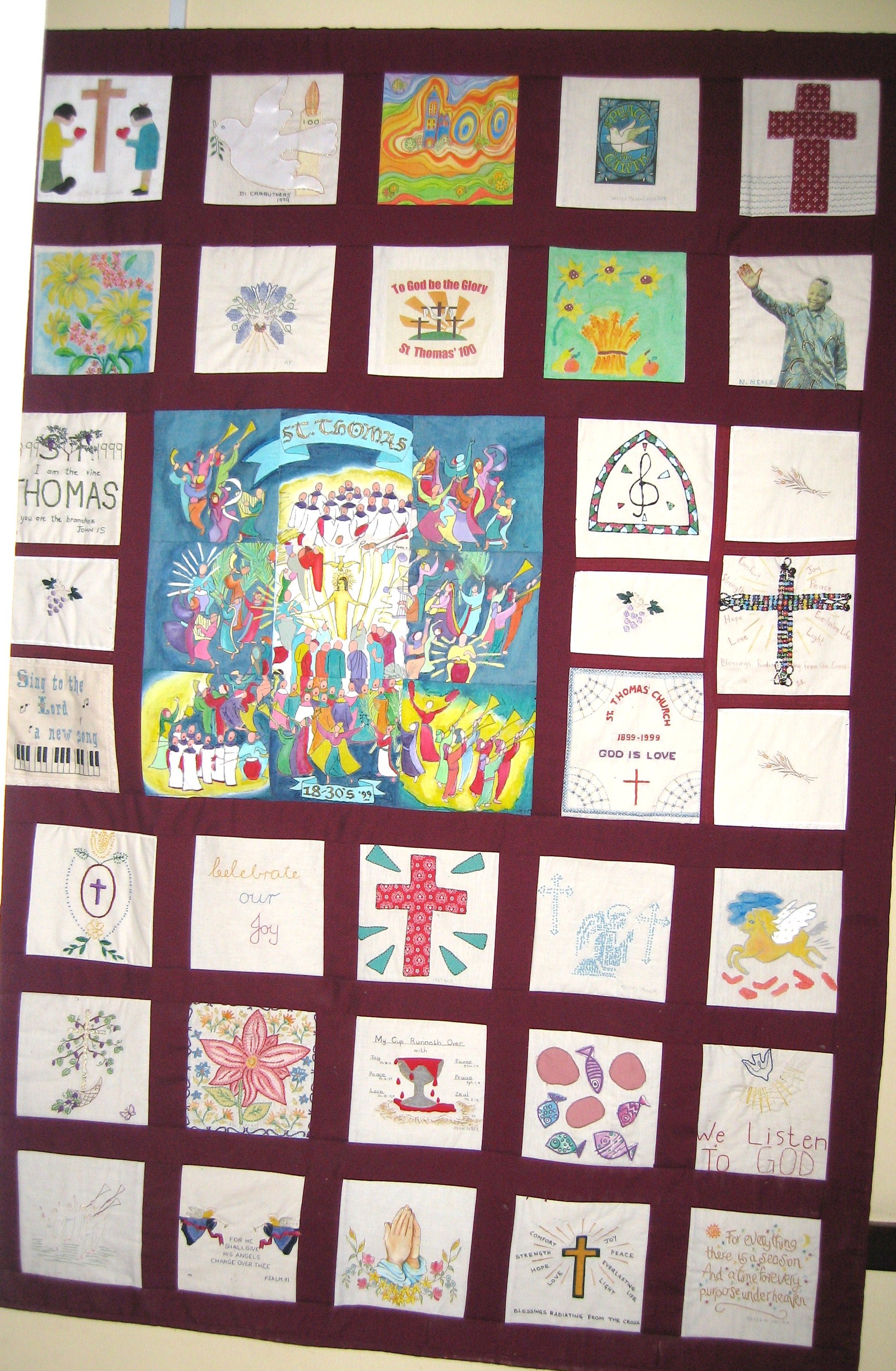 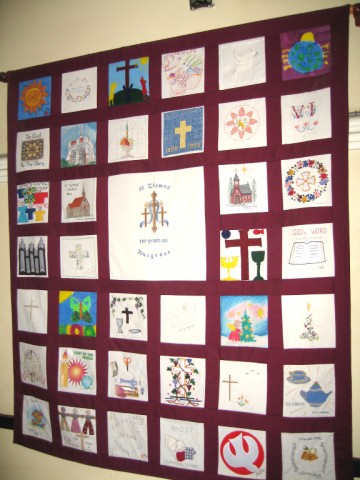 The quilts were made to commemorate the 100 years of St Thomas on Musgrave Rd.  They were the idea of Rev Rogers Govender who asked that squares be made to represent all the different ministries which make up the church.  It was unveiled by Rev Govender in 1999.

We took the quilts down in October to paint the rear wall of the church and to get them cleaned.  Dee suggested that we should find somewhere more accessible to hang the quilts, so that the congregation could see and appreciate the fine work that has gone into them.  After some deliberation we decided to hang them on the West wall of the church.

Do have a close look at these fine examples of needlework which embody the work of the church.  You will recognise many of the contributors both past and present.  The large square in the centre on the one quilt represents the evening service and was organised by Chris Meyer.  One square is of the organ representing the music in the church, others stand for MOST, the flower ministry, the tea garden, the children’s ministry and so many more.